Who really invented the Western Blot?

Do you know who invented the Western blot? 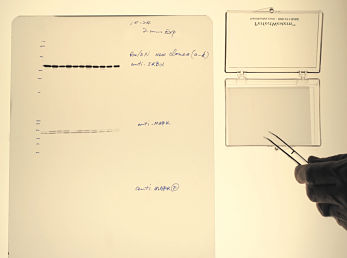 Learn the actual story behind the western blotting technique

Was it Neal Burnette (at Fred Hutchinson)?

Was it Harry Towbin's group (in Switzerland)?

Was it George Stark's group (at Stanford)?

1979 certainly was a busy year in the development of western blotting (also called "Protein blotting" or "Protein immunoblot"). They were all working hard and trying to publish.

But who deserves the real credit?

All 3 groups of researchers in Seattle, Stanford, and Basel seem to have been working independently from 1977 to 1979 on a better method to detect proteins using antibodies. They all attempted to publish in 1979 and certainly all deserve some credit for the development of the western blot. But who should we cite as the real inventor? This question is not as easy to answer, but it is a very interesting story.

George Stark's group at Stanford University, including Jaime Renart & Jakob Reiser, published first (Ref 3), submitting in April 1979 and published in July 1979. They used passive transfer of the proteins, then 125-I-labeled Protein A for detection.

Harry Towbin's group in Basel, Switzerland, including Towbin & Julian Gordon (at Friedrich Miescher Institut) and Theophil Staehelin (at Hoffmann-La Roche), submitted in June 1979 and was published in September 1979 (Ref 4). They developed the method of electrophoretic transfer of proteins to membranes (instead of passive transfer like Stark) and the now-ubiquitous immunoblotting sandwich using electric current to transfer proteins from the SDS-PAGE gel to the membrane (Ref 5). Their procedure also used secondary antibodies for detection; thus, this appears to the actual method that is generally followed for westerns.

W. Neal Burnette, working in Robert Nowinski's lab at the Fred Hutchinson Cancer Research Center in Seattle, submitted in 1979, but it was rejected, then eventually published in 1981 (Ref 6). Burnette definitely gave the technique the name "Western blotting" as a nod to Southern blotting and because their lab was on the west coast. He developed his technique independently, including the electrophoretic transfer step, but became aware of Stark's and Towbin's publications before he submitted his in 1979. He still believed his version was simpler and more universal, thus worthy of publication (Ref 7). He mentions using "unmodified nitrocellulose, radiolabeled Protein A detection, and 2-D separations" as advantages (Ref 7). He also said his method "simplified antigen transfer, antibody detection, and complex visualization" (Ref 8). Interestingly, Burnette reports that his submission in 1979 was "dismissed - not on the basis of the Towbin publication but because the technique was transparently obvious, made no fundamental contribution to the scientific literature, and, most damning, had been given the flippant name of 'Western blotting' in honor, of course, of Edwin Southern and of the West Coast location of its invention." (Ref 8). His procedure was finally published in 1981 after it had already become famous through distribution of pre-prints to friends, who repeated the process (Ref 9). "Pretty soon, I was running a daily seminar on blotting by telephone. I was talking to everyone...because they couldn't read the Xeroxed copy they had. [Western blotting] was taking up all my time by talking on the phone." (Ref 9).

So, who actually invented the western blot and should be given credit for it?

Stark's group published first. Towbin's group developed what appears to be the most common method, including the electrophoretic transfer method and buffers, as well as the use of secondary antibodies. Burnette gave the technique the name among other modifications and was very instrumental in popularizing western blotting. In a 2005 Nature Methods Classic Protocol (Ref 10), Michael Eisenstein wrote "It is arguable...that Burnette's most significant contribution to immunoblotting came when he christened the technique 'western blotting'". When many researchers cite western blotting, they often will reference both Burnette's and Towbin's papers, so perhaps the most accurate answer is that both of them should get credit, but we leave it up to you to answer the question for yourself.

We hope you enjoyed this story and the background behind a technique many of you use every day in your lab. We always find it fascinating to learn more about the history of techniques that have become so vital for exciting and life-saving discoveries around the world. For additional background information and more interesting stories and insight into the development of this procedure, we recommend the references below.

The information presented here is accurate to the best of our knowledge, but we welcome any feedback you might have as to your thoughts on the subject, your experiences/personal knowledge, or any other insight - there is always more to the story than what gets published in the public domain. You can contact us by email at info@genhunter.com.


GenHunter has several popular product lines for Western blotting, all with the goal of saving you money and making Western blots simple:


Please contact us if you have any questions or comments.

Best of luck and enjoy getting PerfectWestern blots!